Pittsburg State University is a public university in Pittsburg, Kansas founded in 1903 as the Auxiliary Manual Training Normal School. Our goal has always been to provide a transformational experience for students and the community. Today, we offer more than 100 academic programs—some of them nationally recognized—within the colleges of Arts and Sciences, Business, Education, and Technology. Pitt State offers personalized attention and a flat-rate tuition for students, regardless of residency.

Pitt State is also a place of intense preparation for the future. Within six months of graduation, approximately 90% of our graduates are either gainfully employed or enrolled in advanced studies.

Pitt State is also the only university in the United States to have a gorilla as a mascot.

The mission of Pittsburg State University is to provide transformational experiences for its students and the community.

Pittsburg State University will be the first choice for: About the Kelce College of Business

The Kelce College of Business at Pittsburg State is among the nation’s leading business schools for quality, high standards, and value. With a mission of offering a well–rounded, world–class education that engages students and prepares them for a future in the business world, the Gladys A. Kelce College of Business stands out as one of the premier business colleges in the country.

The Kelce College of Business is:

Gus the gorilla is a symbol of the enthusiastic spirit that’s a huge part of Pitt State. 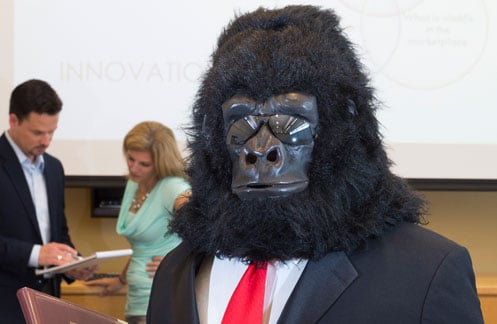 The students who formed the new pep club at the State Manual Training Normal School in 1920 couldn’t have known that embracing the characterization of the school’s supporters as “gorillas” would become the foundation for the one of the most unusual, recognizable and beloved college mascots in the U.S.

The story of how PSU came to be known as the Gorillas and the birth of Gus goes back to 1920 and the 24 young men who formed the new pep club.

“The first public appearance of this new pep club occurred on Thursday, October 7th, 1920, during an all-school assembly,” said Randy Roberts, PSU archivist and interim dean of library services. “The campus newspaper reported this new club was organized to ‘accelerate college spirit and enthusiasm until it shall permeate the state.’ They called themselves the Gorillas, and their motto was ‘we want pep and we want it at all times.'”

The reason the group chose to call themselves Gorillas is shrouded in the mists of time, Roberts said, but usage of the term was well understood at the time.

“According to Mathew’s ‘Dictionary of Americanisms,’ to call someone a gorilla in 1920 meant they possessed characteristics of strength, intimidation, and untamed rowdiness,” Roberts said. “That’s exactly the characteristics the first Pittsburg Gorillas hoped to portray.”

Written accounts from the time vary, but it appears that in 1923, the pep club recruited art student Helen Waskey to make the first drawing of Gus Gorilla—hence the birthday of the mascot. By 1924, the Gorillas had grown to about 200 members, and the student body voted in January 1925 to adopt the gorilla as the mascot for its athletics teams.

Roberts said the university’s adoption of the gorilla for the mascot was fortunate.

“The school’s name changed from State Manual Training Normal to Kansas State Teachers College in 1923,” Roberts said, “but in 1925, the city newspapers still referred to our teams as the Pittsburg Normalites or the Manuals. That’s not a mascot I think would be popular today.”

Today, Gus the Gorilla is wildly popular among alumni and fans. He attracts mobs of children whenever he appears at athletic events or in the public, and his image appears on everything from t-shirts and coffee mugs to license plates and key chains.

Submit this form, and an Enrollment Specialist will contact you to answer your questions.

Ready to Get Started?

for help with any questions you have.